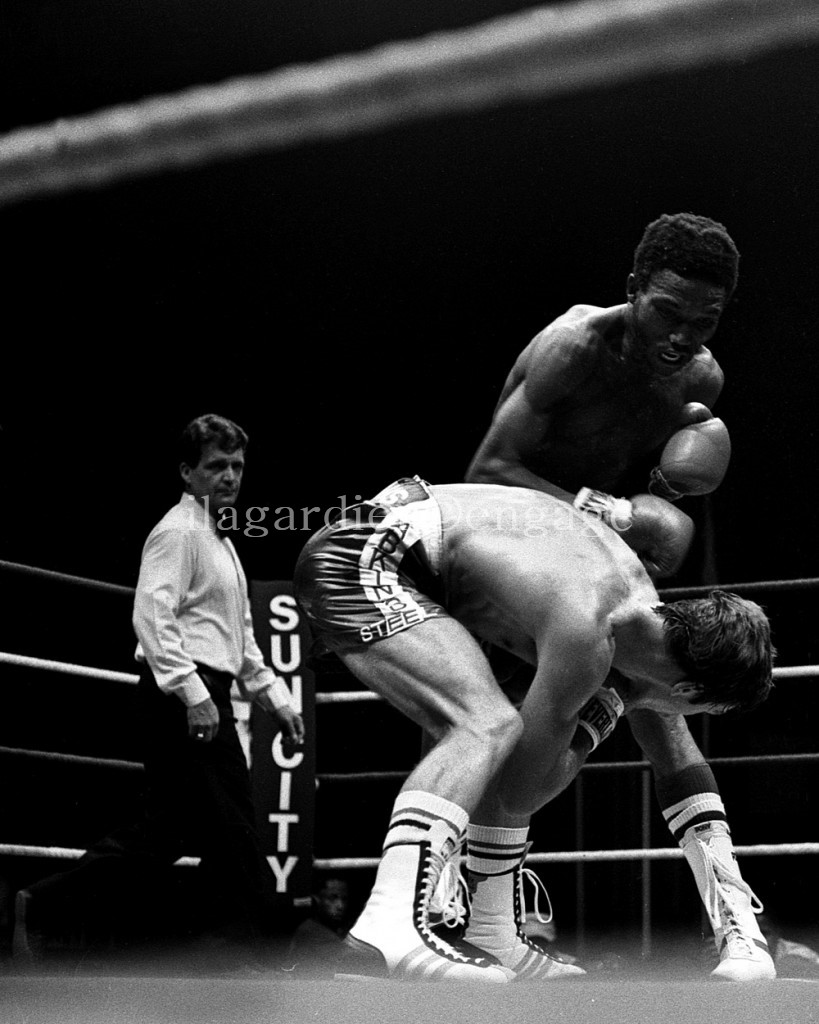 8 August 2020. I first posted these pictures and text on my website more than a decade ago. (I think in 2009). I was wonderfully surprised to find it that I had a backup on an old storage drive. Here, again, it is. Thanks to Perfect Hlongwane for reminding me about Jacob Morake, which forced me (kind of) to see if I had a backup of the original post. I have left the original post more or less intact. As always, if you see any errors, or want me to add something – feel free to do so in the comments section, or on twitter at @ismaillagardien

This set of pictures is of a friend, Jacob Morake, to whom I was introduced by Walter Dhladla, the photographer who first taught me darkroom techniques in 1984, when I was a struggling reporter doing freelance press photography, and holding down a few other jobs while I learned the craft. I asked (another) friend, the journalist Gavin Evans, to share his memories of Jacob’s last fight and the night he died. Taking pictures of the blows that killed Jake was quite traumatic…. At the bottom of this page is a short piece written by (yet another) friend, James Sey, on artistic representations of boxing and the boxer.

NB I don’t particularly care for boxing or any of the martial arts (I am just a wimp) I am simply sharing these pics.

A BRIEF COMMENT ON THE FIGHT THAT ENDED MORAKE’S LIFE

Jacob Morake came back from 15 month’s inactivity to fight the world rated Brian Mitchell for a fourth time (Mitchell had won two of their three previous fights). Morake took a sustained battering and was dropped heavily in the 11th round and wearily dragged his burn-scarred body upright (the burns a result of a childhood accident). The referee, Colonel Wally Snowball, looked transfixed and failed to stop the fight. The bell rang and his cornermen should have retired him when he said he didn’t want to continue. “Just one more round,” they pleaded. He came out for the 12th and Mitchell dropped him again, and still Snowball failed to intervene, instead waving the white man in to finish the job. Three heavy, unanswered punches and Dancing Shoes fell, as if shot, his head banging against the floor. Snowball counted him out and he he never woke. He left the ring on a stretcher and the announcer said: “Give a big hand for Charles the challenger!” before inviting the Sun City crowd to stand in appreciation for the visiting Australian ‘rebel’ cricket players (who had taken money to defy the anti-apartheid sporting boycott – see picture at the bottom). He then announced the winner of the ‘Isuzu Bakkie competition’. Seven hours later Jacob ‘Dancing Shoes’ Morake was dead.

The sports boycott busting Australian cricket players receive a warm welcome from the crowd. In the bottom left hand corner of the picture is former South African boxer, Gerrie Coetzee

I seem to recall that the text, below, first appeared on James’ Facebook page. I scraped it (with his permission), and used it here.

Artistic representations of boxing and boxers date back to the origins of classical culture in different forms. Even the Vatican houses nineteenth century sculptures of boxers. The modern(ist) association between art and boxing is of more interest, however.

Arthur Cravan, a Dadaist adherent and nephew of Oscar Wilde, once challenged the deposed heavyweight champion, Jack Johnson, to an exhibition match – despite his lack of experience or special talent for the fight game. He lasted seven rounds with a desultory Johnson, who had been reduced to fighting in these bourgeois spectacles for money as he waited to return to the US from his exile on a murky sex charge.

Others in the wider circle of the Western avant-gardes evinced a similar fascination with the noble art – celebrated poet and Dadaist muse Mina Loy was Cravan’s lover, and Djuna Barnes, the experimental novelist, did her bit to turn boxing journalism into a feminist art form between the world wars.

The other notable ‘sport’ beloved by the avant-garde was chess, in particular by Duchamp. What brings together these apparently diametrically opposed pastimes in the avant-garde imagination is their commitment to contingency. Despite the rigid structure of chess, the lack of flexible movement of each piece on the 64 square board, and its centuries-long history of standard sequences of moves, each game of chess is a potentially completely contingent field of possibility. Similarly, boxing’s strict code of rules serve as a base platform for the unexpected, unforeseen combination or single punch that produces the most desired result – the knockout. Both boxing and chess are also notable for being individual pursuits, in which such contingent effects are far harder to produce than in the collision and collusion of body and psyche that occurs in team sport. The wrestling with the self in chess and boxing brings them closer as activities to other favoured avant-garde strategies such as automatic writing.

I’m a recent convert to boxing, having taken up the sport in the last few months as an alternative to a long career in team sport – in my case, football – and as a consequence of a long fascination with pugilism. While the training to fight in the ring is complex, brutal and highly entertaining, it can never approach properly the idea and experience of the fight itself. The fight is a field of potential, only partly laid out by the fighter’s skill, strength and dexterity. All this, and the many hours of training, has to come together at once, and all the while trying to avoid the inevitable obverse of the operation – your opponent trying to hit you as hard and effectively as they can.

While the complexity of the fight experience has an aesthetic dimension, only partly exploited by the avant-garde in their fascination with the marriage of body and singular event that boxing represents, the boxing match has so much more in it. The absolute physicality of it is matched by the mental and psychological commitment of the combatants, and by the dramatic staging of the fight in the raised square ring. For spectators there is rarely the outright brutality and naked violence of a street fight, despite the objections of the sport’s politically correct detractors. Mastery of emotion and control of the body are paramount.

My first fight, at the admirable Armoury Boxing Club in Cape Town, revealed these ‘secret codes’ to me, and I instantly understood why a code of spontaneous respect and deference exists among boxers. There is an opacity and intensity to fighting someone that has a ritual quality to it, something which has long been fascinating for artists, not only of an avant-garde stripe. The fact that this direct and focused violence takes place in a highly ritualised and codified setting marks boxing out, much more clearly than other sports, as an arena of what we might call ‘liminal culture’ – those forms or places of cultural expression where normal rules, mores and interaction are suspended, and a rite of passage, or a powerfully charged ‘interzone’ takes their place.

South Africa is of course well known in global boxing terms, and we produce more than our fair share of world champions. There is a long history in the country of the association of boxing with poverty, of boxing as a way out of the ghetto, as there is elsewhere in the world. South Africa’s archetypal boxing myth is the tragedy of the fictional ‘King Kong’, Ezekiel Dhlamini, the champion heavyweight boxer whose dislocation in the big city, and eventual imprisonment and suicide, mirrors the real-life story of Jack Johnson, the pet boxer of the modernist avant-garde. King Kong the musical was a favourite of the famous Drum magazine, which was also famous for its dramatic portraits of boxers.

Documentary photography has long used the violence, balletic grace and pathos of boxing and boxers as staple subjects. In South Africa photographers like Vathiswa Ruselo have composed photo-essays on boxing in the Eastern Cape, a renowned hotbed of talented fighters. The iconography of the fight game has featured in the work of Churchill Madikida on initiation, while another contemporary example is Tracey Rose’s video installation TKO, featuring the naked artist punching a heavy bag. A recent show in Johannesburg by London-based Ghanaian artist Godfried Donkor dramatises in paintings the tangled history of black slavery and prizefighting in the colonies.

Beyond the fascination with boxing as a subject, perhaps what attracts artists most to boxing is the hold it has on a liminal, yet powerful and socially charged, form of expression. The ritual violence of boxing is a deeply ambivalent experience for most, certainly most spectators, and the rigour and discipline of its preparation marks it out only for devotees and initiates. Yet these qualities – of liminality, of a socially ambivalent yet highly specialised and disciplined field – bring it closer to the art world than seems readily apparent.

It’s this affinity of art with the liminal, socially sanctioned yet taboo ritual of boxing which most fascinated the avant-gardes, and which will continue to draw together the motive force and the iconographies of art and boxing, even in our far more self-aware and self-ironising contemporary culture.